View source
watch 01:36
We're Getting Mutants in the MCU - The Loop
Do you like this video?
Play Sound

The SCP Documents are essentially shortened versions of the original articles on the SCP wiki, with the most important information highlighted.

Currently, there are documents for... 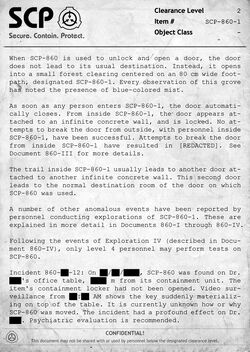 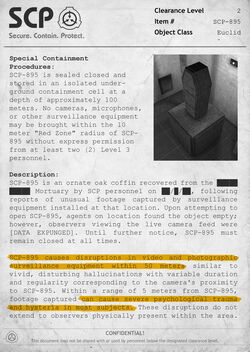 Retrieving documents can be useful to an extent depending if you are new to the game or not. SCP Documents can include key details on what a certain SCP is and what it can do.

WARNING: The following may contain spoilers about the game.

"I don't know why I'm bothering. I'm the only one alive anymore, I think. Or maybe just sane? Or am I even that much, at this point? I feel like I have to leave something, some shard of myself behind. I've seen the others, I know I'll most likely not even leave a body. So maybe that's what this is. Slivering myself off, leaving breadcrumbs of my brain, scattered and tattered. I keep hearing things in the dark. It's almost worse than what's in the light. I taste metal. And the sound of someone screaming keeps hangin around

"Aversion to light" my foot. He doesn't mind light, he's never had any issue with light, never, ever, never. He just doesn't like to take all at once, no, not all, not at all. It...there were tests done. During a breach, some girly item that could see things, she watched it, saw it, was seen, saw? He likes to hunt. Or maybe he just likes? He doesn't retreat from the light, he just stops being "it" for a while. He slides back, and hides, and counts to ten again, begin again, and off he goes! Only nobody is ever "it" again. He takes his toys and the players, and he goes home.

"God in heaven (hell?), I think the wall cracked. Or the floor? Ceiling? I haven't been up top in twelve years, I don't know which edge is top. When the locks dropped, the security walls released. Each sub section is sealed now, we're all cut off. 106 is supposed to be secured in this section, but the item overload buggered the usual assignments...I can't imagine what the primary storage sections are like. I saw a concrete wall bulge. I mean bulge, like a bedsheet with a naughty child underneath, then just go back down. My teeth are feeling odd."

"Stupid machine with a stupid idea of a stupid world. Buggering clockwork moron doesn't play fair. I gave it a nice card, and asked nice, and I got a better one in return. Off I skip, until the old man comes and takes my toys away, and off I run. I give it again, and sweet talk and pet, and I get some kind of plastic stick. It glows. The doors don't know it, the computers don't like it, and now I can't open the security boot. I need to get another, try again, maybe, but he's there, sitting, standing, stalking. I can't go back, I hear scraping. Where did my batteries go?"

"Recalled to the pain, as a dinner bell, or just a shiny thing? I can't get to the section with the recall set-up, so I'm the brightest, most ringing bit here. Just a little snap, a little cut, and the old man comes a runnin'. We never know what, or why, but on he comes, The floodlights are supposed to subdue, the shapes and liquids, confuse, but I think he's just lazy. Like a lion. Roar. Takes what he can, but isn't about to work for it. There's always another day, another way, another dead. I can hear him watching me. Through the floors, watching like a fish tank. Blub blub."

"I can hear him. Can you? Listen, I swear, he's there, on the inner side of the wall...listening. I can hear his teeth. They sing like a power line, pitched to make your bones squeak. I wish he would just kill me. Kill them. No. The report lies, lies to the bone. He doesn't kill anyone, not really. They die later, die of wounds, or additions, or attentions, but no. He pulls them in to his box, and hurts them, then makes the maze. He cradled someone in barb wire, touching them while they tried to scream through a shredded tongue. He owns the rules there, he's god there, the all and one. What if it's here, too? Making all this just to torture it. Make an ant farm just to have targets for the magnifying glass. My molar fell out. It was black. I don't have it anymore.

Will you won't you. Won't you will? He is slow, because he has time. Endless time. The group unconscious, the fear of the lean, cruel and powerful...is he it, or the son of that feeling? You may outrun him, run around, run run runrunrunrun and it means no. he just keeps going, coming, watching, smiling. I hate this place. My home is gone, and I hate this, and I hate."

Community content is available under CC-BY-SA unless otherwise noted.
Advertisement