View source
WARNING: The following may contain spoilers about the game.

Gate B has three out of the 5 endings that can be found in the game, with the two other at Gate A.

Gate B is found in a single room with a large blast door, with its name labeled above the door. Next to it is an elevator that leads to the surface of Gate B, which consists of some buildings and a long hallway with glass coverings built into the white, snow-covered hillside. The end destination is a large control room with a screen displaying a conversation between two control units about the use of the Alpha Warheads against SCP-682.

As a result of returning power to SCP-079 by turning the remote door control back on, SCP-079 will allow access to Gate B. Using the elevator, the player is greeted to a large hallway which leads to the walkway to the end sequence control room. The player has to run past patrolling guards on the rooftops and the Apache helicopters, which will shoot at the player. The player will need a high level keycard to enter the final room.

As the player passes through the hallway, an event will occur with SCP-682, who also breached containment. Apaches will begin firing upon an offscreen SCP-682, trying to stop it from escaping. If the player chooses to, they can see one of the helicopters be swatted out of the sky by SCP-682's claw. Shortly after the Apache is downed, the intercom will come on, announcing that the Alpha Warheads will be detonated.

There are two endings at Gate B. If the player has not turned off the Alpha Warheads in the Warhead Silo before the player reaches the control room, a siren will sound and a bright flash from the warhead's explosion will cover the screen at the end of the countdown. After this, the ending logo will appear. A radio transmission will be heard, as a radio operative from helicopter OH-6 requests the deployment of an MTF unit to scout for remains at ground zero. However, the transmission is cut-off mid sentence as a large roar is heard, indicating that the nuclear blast was unsuccessful in destroying SCP-682.

The other ending will be nearly the same, however the flash will not occur and the intercom will come again and order all MTF units head back to the gate to handle SCP-682. The MTFs will locate the player and shoot him, triggering the ending with a transmission clarifying that D-9341 has been terminated: "Class D found at Gate B pathway dead. He seems to have a full pocket with gear from the Foundation. Yeah, I just want to know, how the hell did the class D get past Gate B? I want all personnel to check the security tapes of who was stationed there. Roger that."

A third ending can occur as well. This one occurs if the player has turned off the Alpha Warheads, if SCP-173 manages to get to Gate B and reach and kill the player before the choppers or MTFs can, this triggers the third ending at Gate B. When the ending screen shows up, a brief radio transmission is heard between two Foundation employees whom have taken notice of the player's actions. One voice asks if he should be captured and brought in for questioning while the other states: "That won't be necessary, looks like 173 just took care of him."

Editor's notes: I discovered the third ending through console commands, by entering in commands for all the ending screens. I noticed these possible commands in the console help notes. I tried all of them, first Gate A's then B's. I received that radio transmission in the Gate B ending that seems to be triggered by SCP-173 through the way stated above. Further testing is required at Gate B with 173 by doing this to see if it actually works. After you hear that the warheads failed to detonate, use console commands to spawn 173 if necessary. Also if you go to the entrance or blast door then noclip straight up will Teleport you to the outside or walkway.

The entrance to Gate B. 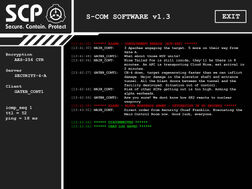 The screen confirming the detonation of the Alpha Warheads found in the control room. 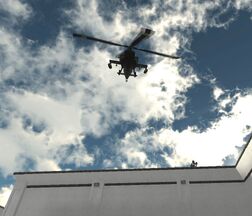 One of the several helicopters guarding the gate perimeter. 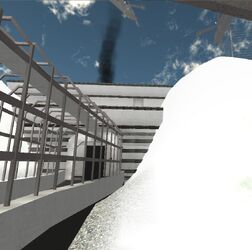 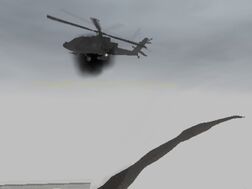