Guards are Foundation personnel tasked for protecting scientists and escorting Class-Ds to containment chambers or cells. They are in some ways similar to MTFs, but are already stationed at places, unlike MTFs which come in later as reinforcement to escort any surviving Foundation personnel during a breach.

The guards are equipped with P90 PDWs equipped with a green ACOG scope. They are tasked to escort Class-Ds to containment chambers for testing and guarding the structure. They will also terminate Class-Ds if needed.

Agent Ulgrin is the first guard the player meets. He appears in the intro, opening the player's cell and ordering them

to follow him. If the player refuses, he will close the cell and have it filled with decontamination gas, suffocating and killing the player.

If the player exits the cell but refuses to follow the guard anyway, he will terminate the player and can be heard telling the other guard to get another Class-D while he deposes of the body.

After the breach, himself and Security Chief Franklin will appear below the catwalk when SCP-173 arrives. Franklin explains what to do, and they both manage to escape. Ulgrin will open fire if the player gets too close to them.

Master Guardian Paul Doinkaloids seen on a balcony during the intro sequence, just outside of SCP-173's containment chamber. If the player refuses to enter the cell, the guard will be ordered to terminate them, which he will enthusiastically do.

If you exit the containment chamber when the doors malfunction, he will command the player to re-enter the chamber. If the player refuses, he will terminate you. After SCP-173 breaches containment and kills the other two D-Classes, it will then appear on the balcony, a few feet from the guard. The guard will then shoot at SCP-173 in an attempt to ward it off, but unfortunately gets killed by SCP-173 before fleeing into the vents.

This guard is seen down the stairs to the side of the exit hall at the start of the game. He is seen with a scientist, discussing escape routes, when the lights go out again. During this time, SCP-173 will fall out of the vents between the two before killing them both, followed by it redirecting its attention to the player.

As of v.0.9, however, this guard no longer accompanies the scientist trying to escape. Instead, the guard is replaced by a janitor. The guard himself, however, does still appear in a new scripted event: he is seen entering an elevator sometime after the second room. After a few seconds, the elevator can be heard crashing down. If the player opens the elevator, they will find a handful of blood.

This guard appears in the men's bathroom and can be heard sobbing. He then hears the player and, assuming that there is something incredibly dangerous outside the room, shoots himself.

There (may still be) a glitch where the audio for him killing himself can be heard, even if the player has already been to the bathrooms.

This guard appears in a scripted scene taking place in the server room. He accidentally sets off SCP-096 and attempts to run away. Before he gets the chance, however, SCP-096 gets attention and chases him. The security guard attempts to shoot it, but to no avail. He is killed and his blood splatters all over the window.

Security Chief Franklin is heard ordering the H.I.D Turret to be activated on SCP-106, in an attempt stop its escape.

In the case SCP-106 has been contained by the player or by the NTF/MTF, another MTF squad will come from the outside and order the protagonist stop before they recapture him.

This guard speaks over a P.A., ordering the helicopters to attempt to capture SCP-682 and later on, in case the player deactivated the nuclear warheads, to get back to Gate B to kill SCP-682. MTF come into the server room and open fire on the protagonist.

If the player refuses to exit the cell

Upon stepping out of the cell

If the player runs off or doesn't follow the guard

When the guard starts a conversation 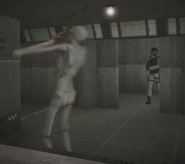 The Balcony Guard wields a HK G36K instead of a P90 in the indev and very early versions.

Two of the three guards from the Intro sequence.