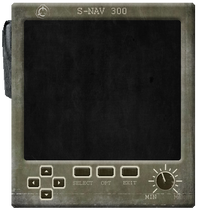 The S-Nav is an equippable item in SCP - Containment Breach. The S-Nav is used for navigation, each individual square represents a room. There are 3 different variations of the S-Nav.

The default version of the S-Nav, the S-Nav 300 will need a 9V battery in order to function. S-Nav 300s can be found scattered throughout the facility, in offices, SCP-106's containment chamber, the small control rooms, server rooms, and sometimes hallways. Any rooms that have not been visited yet will remain hidden on the S-Nav 300.

By putting the S-Nav through SCP-914 on the "Fine" setting, the player can now view the entire map without exploring the area first. The S-Nav 310 is capable of informing the player where to go and which paths are dead ends. S-Nav 310s, however, still need batteries.

A small red ring and the name of an SCP will appear on the S-Nav Ultimate's screen if they are nearby. The smaller the ring is, the closer to the player it is. It is able to detect multiple SCPs in an area.

The S-Nav as it appears in the player's inventory. 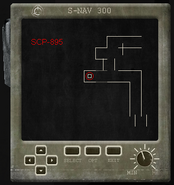 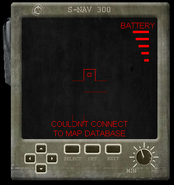 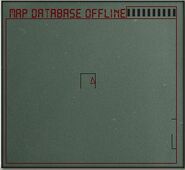 An S-Nav in the starting area
Add a photo to this gallery
Retrieved from "https://containmentbreach.fandom.com/wiki/S-Nav?oldid=30362"
Community content is available under CC-BY-SA unless otherwise noted.