SCP-087-B is an experimental horror game created by Regalis. It is based on the original SCP-087 and it is considered to be the stepping stone to the creation of SCP - Containment Breach.

The game starts out at the entrance where an unidentified doctor will tell the player through a radio to proceed down the hallway and to be cautious. For the rest of the game the player is walking through hallways and down staircases while attempting to avoid monsters.

There are a total of 270 floors. Once the player reaches the 250th, the walls will close on the player and they will be ambushed and killed by the The Masked Man. As the game crashes, one of these crash messages will appear:

WASD or the arrow keys to move.

The Masked Man is the most common entity that manifests throughout the game. It appears as a black humanoid figure wearing a white mask with a smile two circular black eyes and all clothing or corpse are black. This is designated as SCP-087(B)-A.

Throughout the game it will manifest in a variety of ways, as listed below.

Physical contact with the Masked Man will result in an instantaneous death. The player must keep their distance from it in order to stay alive.

The Red Mist Monster appears as a black humanoid figure with large red spots across its body and solid white eyes. also by some fans called "SCP-087(B)-B".

It will appear a few times throughout the game, as listed below.

This entity will also shift the player instantaneously upon physical contact.

At random occasions throughout the game, it will manifest before the player with or without its smile. The exact distance from the player varies with each manifestation, ranging from being close to right in front of the player to being nearly half a hallway's length away from them.

When the player moves close enough to it, it will suddenly vanish. While vanishing, it will whisper "No" to the player. This behavior occurs with each encounter of it and does not change in anyway whatsoever.

The Unidentified Doctor is a man who speaks via radio. He directs the experiment, counseling the player and directing them down the staircase. However, as time passes, the radio signal will become weaker, until it will be intercepted by a second voice who may possibly be one of the few monsters encountered in the SCP-087-B. 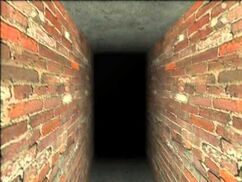 A brightened screenshot of SCP-087-B.