SCP-096, also known as "The Shy Guy", "The Tall Man", and "The Crying Man" is a hostile humanoid SCP in SCP - Containment Breach.

SCP-096 is a humanoid creature measuring approximately 2.38 meters in height. Subject shows very little muscle mass, with preliminary analysis of body mass suggesting mild malnutrition. Arms are grossly out of proportion with the rest of the subject's body, with an approximate length of 1.5 meters each. Skin is mostly devoid of color, with no sign of any hair. SCP-096 shows very little blood on his body. Some blood can be found on his mouth and his hands, and faint blood on his chest. Events: SCP-096 has 2 in game events. They include the deaths of 2 Security guards. The server room: A guard will walk into the server room and notice 096's breach. SCP 096 will then turn around causing its face to be viewed. The guard will attempt to leave but near the wall levers, he will attempt to shoot 096 and the player can hear the guard groan in pain and SCP 096 screaming. This effect was later removed. The chamber guard event: When a player visits SCP 096's chamber they will be able to hear a voice. SCP 096 will be able to heard screaming and the guard pleading for his life. The guard will try to shove a level 2 keycard into the slot but SCP 096 will reach and loud groaning and a bone cracking can be heard.

SCP-096 is normally extremely docile. However, when someone views SCP-096's face, whether it be directly, via video recording, or even a photograph, he will enter a stage of considerable emotional distress. SCP-096 will cover his face with his hands and begin screaming, crying, and babbling incoherently. Approximately one to two minutes after the first viewing, SCP-096 will begin running to the person who viewed his face (who will from this point on be referred to as SCP-096-1).

Upon arriving at SCP-096-1's location, SCP-096 will proceed to kill and [DATA EXPUNGED] SCP-096-1. 100% of cases have left no traces of SCP-096-1. SCP-096 will then sit down for several minutes before regaining his composure and becoming docile once again.

SCP-096 spawns in a server control room and brutally kills a Guard inside the room who accidentally viewed his face. The player has to reset the power so they may escape from the room, due to the doors being locked if they enter the control room. SCP-096 himself will wander around the room, making it difficult to avoid looking at his face.

If the player views SCP-096's face, even in the slightest, he will enter an agitated state and attempt to cover his face and begin to panic, continuing for several seconds. Shortly after, he will begin chasing the player down to kill them as punishment for viewing his face.

SCP-096 is extremely fast and can't be deterred by doors, keycode or not, as he will rip them open to catch up to the player. Once he catches up to the player he'll begin tearing apart their limbs and start [DATA EXPUNGED] them. Tesla gates prove unsuccessful in stopping SCP-096, however, he will become stunned for a moment after being shocked.

SCP-096 can also spawn in a lockroom, where he is sitting down in the center of the room around several blood splatters.

Particular attention has to be given to him, since in case one of the MTF operatives will see his face, causing the others to see it too, SCP-096 will start to be highly agitated and aggressive against everyone he will meet, wandering around the Site in that state.

SCP-096 is one of the hardest SCPs to get away from. Since doors are no use, your only hope is to find a tesla gate and stun him, then run to the nearest exit. 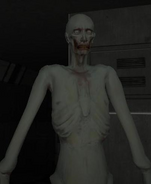 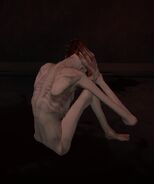 SCP-096's sitting animation with his hands over his ears in a lockroom.

SCP-096 entering an emotional state after having his face viewed. 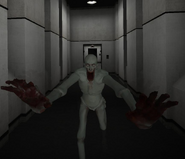 SCP-096 pursuing the player with his arms raised at the front. 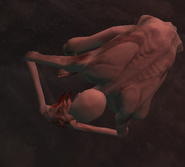 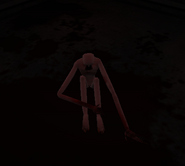 SCP-096 jumping at D-9341 before killing him.
Add a photo to this gallery
Retrieved from "https://containmentbreach.fandom.com/wiki/SCP-096?oldid=33441"
Community content is available under CC-BY-SA unless otherwise noted.