SCP-1025, or the "Encyclopedia of Diseases", is an SCP object that can be obtained in SCP - Containment Breach.

SCP-1025 is a hardcover book, approximately 1,500 pages long. The front cover and spine feature the title "The Encyclopedia of Common Diseases, by Coltan Press". No other copies of a book with that title and publisher have been found, and no record of the publisher exists.

SCP-1025 can be found adjacent to SCP-714's room. The player must have a card of at least level 3 or higher in order to enter its room. If the player decides to read SCP-1025, a random page will be selected and the player will receive any of the following:

There are a number of ways to negate SCP-1025's effects; an upgraded gas mask can negate the effects of lung cancer and the common cold, but not cure them. SCP-500 is capable of curing all symptoms. If the player is wearing SCP-714, then they won't develop any of the symptoms. However, applying the ring after reading the encyclopedia will neither prevent the effects from happening nor cure them.

SCP-1025 when in the player's inventory.

SCP-1025 in its containment chamber. 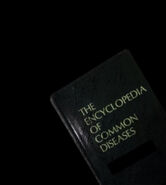 SCP-1025 as it appears in the loading screen.
Add a photo to this gallery
Retrieved from "https://containmentbreach.fandom.com/wiki/SCP-1025?oldid=31794"
Community content is available under CC-BY-SA unless otherwise noted.