SCP-106 is the tertiary antagonist of SCP - Containment Breach and a hostile, Keter-class SCP object, known for his corrosion effect on all matter he makes contact with. He is of high importance to keep contained due to his hazardous and hostile nature.

SCP-106 appears to be an elderly humanoid, with a general appearance of advanced decomposition. This appearance may vary, but the “rotting” quality is observed in all forms. SCP-106 is not exceptionally agile and will remain motionless for days at a time, waiting for prey. SCP-106 is also capable of scaling any vertical surface and can remain suspended upside down indefinitely. When attacking, SCP-106 will attempt to incapacitate prey by damaging major organs, muscle groups, or tendons, then pull disabled prey into his pocket dimension. SCP-106 appears to prefer human prey items in the 10-25 years of age bracket.

SCP-106 causes a “corrosion” effect in all solid matter he touches, engaging a physical breakdown in materials several seconds after contact. This is observed as rusting, rotting, and cracking of materials, and the creation of a black, mucus-like substance similar to the material coating SCP-106. This effect is particularly detrimental to living tissues and is assumed to be a “pre-digestion” action. Corrosion continues for six hours after contact, after which the effect appears to “burn out”. SCP-106 is capable of passing through solid matter, leaving behind a large patch of some kind of acid. SCP-106 is able to “vanish” inside solid matter, entering what is assumed to be a form of “pocket dimension”. SCP-106 is then able to exit this dimension from any point connected to the initial entry point (examples: “entering” the inner wall of a room, and “exiting” the outer wall. Entering a wall, and exiting from the ceiling). It is unknown if this is the point of origin for SCP-106 or a simple “lair” created by SCP-106.

Limited observation of this “pocket dimension” has shown it to be comprised mostly of halls and rooms, with [DATA EXPUNGED] entry. This activity can continue for “days”, with some subjected being released for the express purpose of hunting, recapture, [DATA EXPUNGED].

SCP-106 will spawn anywhere in the map. He will always spawn in the maintenance tunnels. SCP-106 will search the map for you and chase you down (at a slow pace) until he kills you, unless you get far enough away. SCP-106 can materialize through solid walls and doors, and when he enters the same area as you, he emits a "sludge" sound.

SCP-106, strangely, does not appear to be able to hit you just because he initiates an attack. SCP-106 will attempt to punch you; if he hits, you will be transported to his Pocket Dimension, but if you retreat fast enough, he will fail, leaving you unharmed. If you're quiet, quick and careful, you can string SCP-106 along, evading his slow movements. It is still best to flee when he appears, as aside from getting him to pass through a Tesla Gate, using SCP-1499 or simply running, there is no way to stop him apart from recontaining him.

SCP-106 appears to be coded to simply walk directly at you, disregarding the laws of physics. He is capable of vertically through empty air if you ascend a staircase.

SCP-106 is the second SCP that you will encounter, even if indirectly. In fact, when you will enter in the following room next to SCP-173's containment room, you can clearly hear his distorted laugh and also can see on the lower floor a huge puddle of his corrosive slime, where some furniture as tables and chairs can be seen disappearing into it, presumably with the unfortunate personnel who were working there.

SCP-106 is a mobile threat, and appears quite often. He can spawn at any time near you (either from the floor or from the ceiling). If SCP-106 manages to catch you, he will injure you and pull you through the floor and into the pocket dimension. SCP-106 can also spawn in scripted events, such as in the Maintenance Tunnels or in front of SCP-895. He can also be seen traversing across the grated hallway and the T-shaped room where he drops a dead scientist from the ceiling, or in an End Room dragging down, in a puddle of his corrosive slime, a janitor attempting to escape.

SCP-106 appears at the Gate A ending, attempting to escape when he is effectively halted with the H.I.D. Turret, causing him to retreat to its pocket dimension. If you contain SCP-106 and then goes to Gate A, SCP-106 will not appear, and the second Gate A ending will commence.

SCP-106 can be detected using an S-NAV Ultimate, even if the corrosion sound is not heard.

He can be evaded in a way similar to SCP-096 - locate a tesla gate and let him walk through. This will cause SCP-106 to immediately retreat to its pocket dimension. Alternatively, you can get far from him as fast as possible and hope to be far enough, making him retreat again in his Pocket Dimension. Upon spotting SCP-106 walking in the corridors, it's advised to crouch down immediately and back away, as SCP-106 will have less chance to detect the player.

Putting on SCP-1499 will immediately de-spawn SCP-106 making it extremely useful before it's re-contained.

Upon entering SCP-106's containment chamber, you have the option to use the Recall Protocol to re-contain SCP-106. The following is a step-by-step process to successfully recapture SCP-106:

This should successfully re-contain SCP-106 and he will no longer appear around the facility. It should also be noted that if you haven't turned the magnets back on by the time the screen goes static, then SCP-106 will start to chase after you. You can also turn off the magnets once SCP-106 is contained if you want to re-release him. If you fail to correctly contain the SCP or let him out again, it is impossible to re-contain him again. If you wish to obtain the first Gate A ending, you must re-release SCP-106 from his container if he has already been contained by you or the MTF soldiers.

A document about the protocol can be found on a desk next to a keyboard. A level 5 key card can also be found next to the controls. 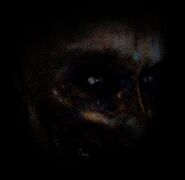 The image of SCP-106's face that randomly appears when you blink in the Pocket Dimension.

SCP-106 on his throne in the Pocket Dimension. Note the glowing eyes.

His eyes, in the game ever since the first version. They can be seen when you can't see him. 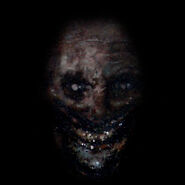 His old face texture, used in old versions of the game. 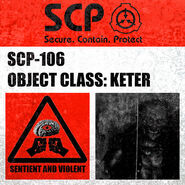 The label on the outside of SCP-106's containment chamber. 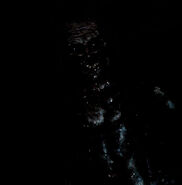 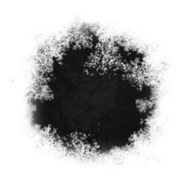 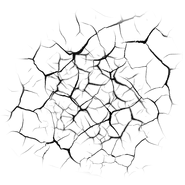 Cracks in the floor created by SCP-106 and his black acid.