SCP-173, also known as "The Sculpture" or "Peanut" is the main antagonist of SCP - Containment Breach and the first SCP ever documented by the Foundation.

SCP-173 is constructed from concrete and rebar with traces of Krylon brand spray paint. SCP-173 is animate and extremely hostile, though the object cannot move while within a direct line of sight. Line of sight must not be broken at any time with SCP-173. Personnel assigned to enter container are instructed to alert one another before blinking. Object is reported to attack by snapping the neck at the base of the skull, or by strangulation. In the event of an attack, personnel are to observe Class 4 hazardous object containment procedures. SCP-173 classification is Euclid, as said before, personnel are to observe Class 4 hazardous object containment procedures.

Personnel report sounds of scraping stone originating from within the container when no one is present inside. This is considered normal, and any change in this behaviour should be reported to the acting HMCL supervisor on duty.

While in containment, SCP-173 has been known to produce a reddish brown substance on the floor which later was identified as a combination of feces and blood. Origin of these materials is unknown. The enclosure must be cleaned on a bi-weekly basis.

SCP-173 is the first SCP object that the player encounters. After the intro cutscene, SCP-173 will escape into a large ventilation system.

After the containment breach, SCP-173 appears in the following room, next to its containment chamber. Security Chief Franklin alerts Agent Ulgrin that SCP-173 is behind him and will slowly back off from it, maintaining eye contact and escaping from the only opened door.

Also in another room, as soon as the lights in said room go out, SCP-173 will drop down from another large vent and kill a scientist and a janitor attempting to escape.

SCP-173 often spawns in lockrooms, catwalks, the small control room, and sometimes in the metal corridors. As of update v0.8 SCP-173 can spawn in the electrical room, along with SCP-106. Because SCP-173 uses the ventilation system to travel, most of its spawn locations have a broken vent.

The sound of scraping stone or the player's vision becoming blurry and distorted means that SCP-173 is present. It is important to take note of this, as SCP-173 frequently hides at corners of rooms to avoid detection.

If the MTF operatives encounter SCP-173, they will proceed to re-contain it, completely ignoring the player if present. When an operative needs to blink, they will announce it before doing so in order to prevent SCP-173 from moving. The operatives will then use a large cage to capture SCP-173 and return it to its containment chamber. 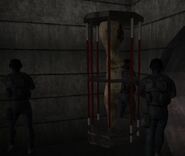 SCP-173 texture when the Halloween Mod is enabled. 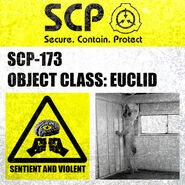 The label outside SCP-173's containment chamber.

An occurrence where 173 jumps at the player's face. 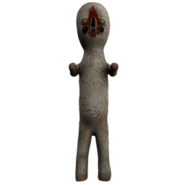 SCP-173 Remastered
Add a photo to this gallery
Retrieved from "https://containmentbreach.fandom.com/wiki/SCP-173?oldid=33437"
Community content is available under CC-BY-SA unless otherwise noted.