Instances of SCP-500, or "Panacea", are a group of SCP objects that the player can find in SCP - Containment Breach.

SCP-500 is a small plastic can which contains forty-seven (47) red pills. One pill, when taken orally, effectively cures the subject of all diseases within two hours, exact time depending on the severity and amount of the subject's conditions. Despite extensive trials, all attempts at synthesizing more of what is thought to be the active ingredient of the pills have been unsuccessful. SCP-500 has been recorded to cure SCP-008 and the effects of SCP-439, and SCP-409.

SCP-500 pills can be found near deceased guards, SCP-035's containment chamber, or the small room in the Maintenance Tunnels. SCP-500 can cure the illnesses caused by the SCP's mentioned above, SCP-1025, and any injuries the player has attained. Because of the small amount of SCP-500 pills that can be found in the facility, it is advised that SCP-500 should not be used unless the player's condition is critical.

An instance of SCP-500 in the small room of the maintenance tunnels. 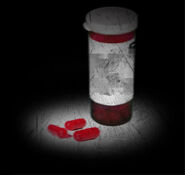 SCP-500 as it appears in the loading screen.
Add a photo to this gallery

Retrieved from "https://containmentbreach.fandom.com/wiki/SCP-500?oldid=31588"
Community content is available under CC-BY-SA unless otherwise noted.