SCP-682 is a large, vaguely reptile-like creature of unknown origin. It appears to be extremely intelligent and was observed to engage in complex communication with SCP-079 during their limited time of exposure. SCP-682 appears to have a hatred of all life, which has been expressed in several interviews during containment.

SCP-682 has always been observed to have extremely high strength, speed, and reflexes, though exact levels vary with his form. SCP-682's physical body grows and changes very quickly, growing or decreasing in size as he consumes or sheds material. SCP-682 gains energy from anything he ingests, organic or inorganic. Digestion seems to be aided by a set of filtering gills inside of SCP-682's nostrils, which are able to remove usable matter from any liquid solution, enabling him to constantly regenerate from the acid he is contained in. SCP-682's regenerative capabilities and resilience are staggering, and SCP-682 has been seen moving and speaking with his body 87% destroyed or rotted.

SCP-682 appears in the game as a background object during the Gate B Ending. During this ending, it attacks a helicopter using a forelimb. Ambience of it roaring can be heard inside the facility, but the player character is not able to encounter it directly.

A WIP model of SCP-682 that might be added in-game. 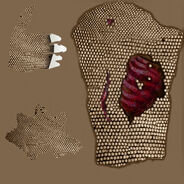 SCP-682´s Model as it appears in the game files.
Add a photo to this gallery
Retrieved from "https://containmentbreach.fandom.com/wiki/SCP-682?oldid=32707"
Community content is available under CC-BY-SA unless otherwise noted.