SCP-895, nicknamed "Camera Disruption", or "The Coffin", or "Devil's Coffin", is an SCP that can be encountered in SCP - Containment Breach.

SCP-895 is an ornate oak coffin recovered from an unspecified mortuary by SCP personnel following reports of unusual footage captured by surveillance equipment installed at that location. When questioned, mortuary staff were unable to determine the source of SCP-895 and how it was transported to the location. Upon attempting to open SCP-895, agents on location found the object empty; however, observers viewing the live camera feed were [DATA EXPUNGED].

SCP-895's chamber can be accessed using a level 3 keycard. The containment has a control room with a small CCTV monitor. Upon entering the control room, the player's head will be drawn towards the monitor. If the player views the monitor long enough, it will cause several disturbing pictures to flash on the screen, and will eventually cause the player to die. The player can, however, at any time disable the camera feed via a lever, since version 0.1.

Past the control room, a spiral flight of stairs leads down to the lower level of the chamber. From here, there is a short hallway that leads to the room holding SCP-895 itself. Before the hallway, there is a dead guard. Lying next to the dead guard is a level 4 keycard and Night Vision Goggles. If the player approaches SCP-895, SCP-106 will spawn before the coffin and will proceed to pursue the player. If the player enters the room a second time after evading SCP-106, it will not appear again.

(This only applies to the newer version of the game). Upon entering the hallway, the player will be able to hear a guard pleading for help. After going back to the staircase, the player will hear the guard screaming right before they land on the floor. Contrary to what the official CB wiki says, the guard's body can in fact be seen.

As SCP-895 serves no use outside of killing the player, it is recommended that SCP-895's containment chamber be avoided at all times, unless the player wishes to summon SCP-106 to enter the Pocket Dimension, or to upgrade their key card.

As of version 0.9, SCP-079 will try to kill the player by broadcasting the images caused by SCP-895 to appear on the lock room monitors, or occasionally SCP-205 if the player looks at them for a certain time. 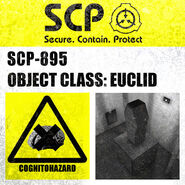 The label outside of SCP-895's containment chamber. The cognitohazard warning sign next to the picture has been added in v0.8.

SCP-895 as it appears in the loading screen.
Add a photo to this gallery
Retrieved from "https://containmentbreach.fandom.com/wiki/SCP-895?oldid=31874"
Community content is available under CC-BY-SA unless otherwise noted.