SCP-914, also known as "The Clockworks", is an SCP object in SCP - Containment Breach. It is currently one of the few SCPs in the game that is actually of use to the player.

SCP-914 is a large clockwork device weighing several tons and covering an area of eighteen square meters, consisting of screw drives, belts, pulleys, gears, springs and other clockwork. It is incredibly complex, consisting of over eight million moving parts comprised mostly of tin and copper, with some wooden and cloth items observed. Observation and probing have shown no electronic assemblies or any form of power other than the “Mainspring” under the “Selection Panel”. Two large booths (3m x 2.1m x 2.1m) are connected via copper tubes to the main body of SCP-914, labeled “Intake” and “Output”. Between them is a copper panel with a large knob with a small arrow attached. The words Rough, Coarse, 1:1, Fine, and Very Fine are positioned at points around the knob. Below the knob is a large “key” that winds the “mainspring”.

There are five options on SCP-914's panel. The output is different depending on what the option is set to.

Dismantles or destroys the item. Risky.

Get the same item, but different in appearance. May also get an item of equal value (e.g. Mastercard to playing card)

Generally, a better version of an item.

Can change your item to be very useful, but can sometimes end up backfiring if used incorrectly. 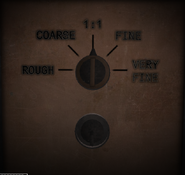 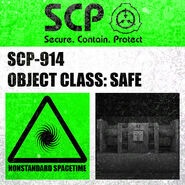 SCP-914's document in-game.
Add a photo to this gallery
Retrieved from "https://containmentbreach.fandom.com/wiki/SCP-914?oldid=32004"
Community content is available under CC-BY-SA unless otherwise noted.